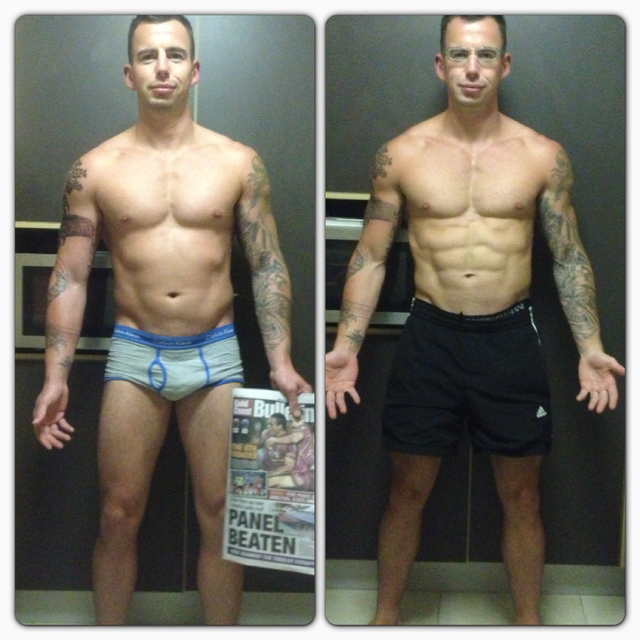 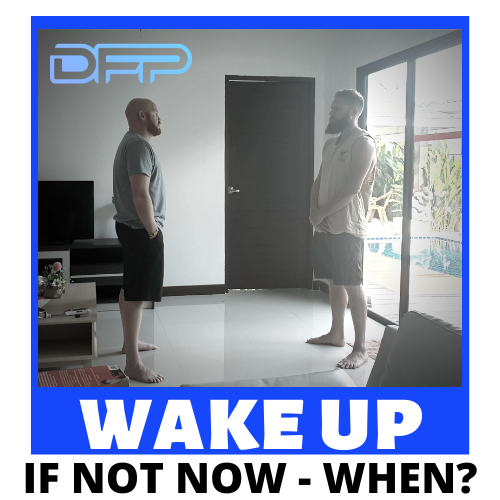 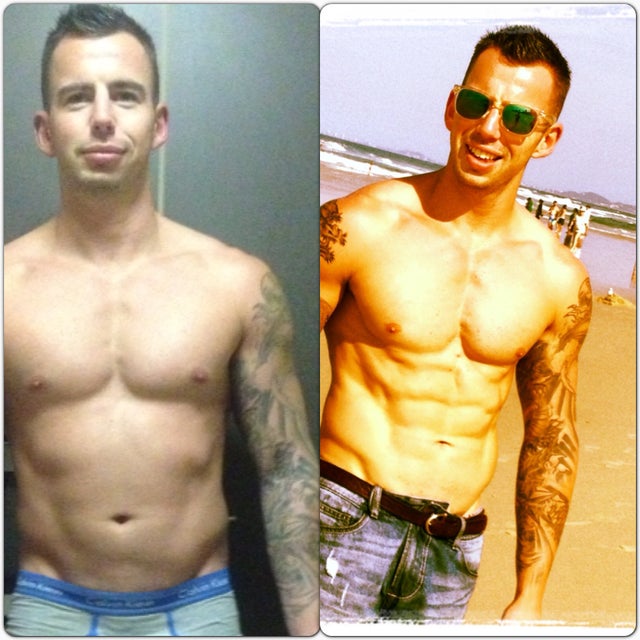 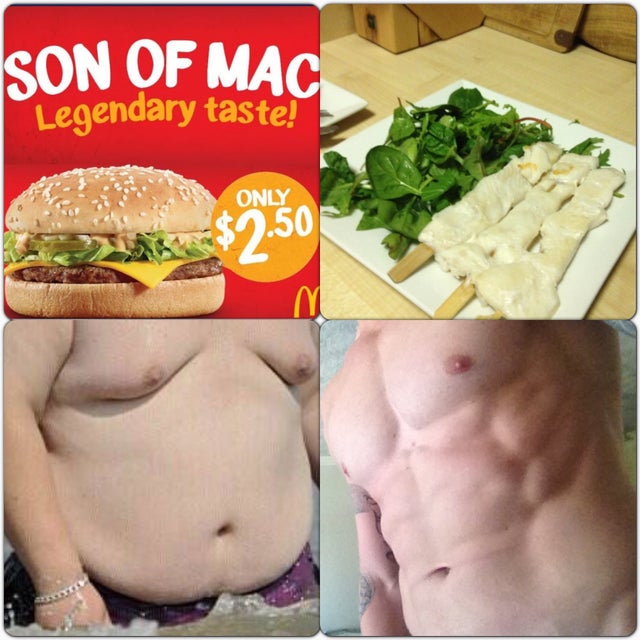 I wouldn't believe it had I not done it myself.

I did this without steroids. I think I was 24, 25 here, I used performance enhancing drugs when I got "too big" around 27, 28. How's that for honesty?

That is what you need with yourself. The truth.

So I guess yeah it was a "challenge"

You buy a 100 dollar tub of protein. Train your ass off, eat right. Then send in your photo. Best one wins.

There must have been some next level transformations because I thought I had it in the bag.

At first it wasn't about the competition, I just needed to get mind right, my drinking was out of control, my girl had just left me for some solo world tour and my PT business was tanking.

I needed something, anything. So I figured I knew all this stuff. (Little did I know until I hired someone for nutrition I didn't know shit.)

This should be easy.

I didn't know what to expect though.

The first task was to give up booze, man that was tough. This was the first time I had not had a drink in 28 days since I was about 15.

It was my therapist, my fun, my shoulder to lean on.

It was destroying my life though, my mother actually died from the drink.

I found things to do on the weekend and strangely enough was saving $$ my from no more pubs or clubs.

I occasionally smoked weed ( I am not saying you should do that, but there is a reason why its becoming legal world wide.) I was so much more relaxed. Slept better.

Wasn't anxious or just waiting for Friday so I could sedate myself with 40 standard drinks.

Then there was the food. I thought I was strict,

I thought I knew what I was doing.

"I was a muay thai fighter I know how to cut weight".

I had no idea. I called my coach on the first night and said "I am hungry", four words "get used to it" *click*

They were right. I wasn't hungry, I was actually eating heaps. Just not what I wanted, when ever I wanted.

I guarantee that is how 95 percent of you eat.

Don't get confused, it is not about doing more. It's about doing less. Being able to say no. And once you master that. Your life will never be the same again.

In the before photo, I was personal trainer on the Gold Coast. I would have considered myself as doing well. Healthy. The reality was I was so broken and so lost I had no idea I had just been stuck in habits, routines, bad social circles. Just like anyone else.

This is one of the pinnacle moments in my life where everything changed, in 28 days. Not because I bought a tub of protein powder or not because I got shredded.

It is because I set a clear timeline, with clear instructions and a pathway.

And I stuck to it. Probably for the first time in my life. And with that clarity I realized I had been driving around in first gear, been on autopilot.

I never had a reason to not sink beers and watch UFC, I never had the confidence or self respect to say no to trash food or booze when everyone else was doing it.

At first I coped a lot of shit for it. And you will to.

People hate when you change, because it reminds them of all the shit they probably should to.

And that's cool. Not your problem though.

28 days later. People never looked at me the same way again. I don't just mean physically. My business blew up, The girl that left me wasn't even on my mind and I had no desire to go back to what I was doing.

(well not every weekend for no reason anyway.)

Now this was just a guy, "who already knew his shit"

and was just doing a "challenge" with a hundred dollar buy in protein powder.

It seemed like a big deal, a real "commitment".

It makes me laugh, because since then I have invested tens of thousands of dollars on my education and skill sets. Hour and hours, years and years seeing life as a permanent "challenge".

But the moment you lose that clear timeline, the positive influence circle, a guide, a reason to go all in.

Guess what else you lose?

You. Back into the pit of shit food, booze, loser friends and promising yourself the world and giving yourself an atlas. aka believing your own bullshit.

I've said all this because thinking about this period in time vs what I offer men now. The DFP can be overwhelming, too much even.

Having your own mentor and team keeping you accountable?

It's confronting to say the least. And you probably think it's too much or not what you need. I would have thought that as well just ten or so years ago.

Every Month on the 1st of the Month. I am going to provide this same blue print, for ten men who each get a partner (so don't fuck it up for someone else). Obviously much better then what I had the time.

And tried and tested on hundreds of men.

A reason to do anything to change how your life is now (like I said it is about doing less, not more.)

End of the 28 days. If you are not happy, satisfied,

keep it, I'll refund it, and you can tell me on video call what was wrong.

I used to manage a gym, one of my highlights was watching people ask for a cancellation form and I would ask them why. I smile just thinking about the shit people would say.

Alright, if you do this.

Actually do it. It will change yours in ways I can't explain look around danfitts.com or my social media, dozens of men will tell you for me.

We're about ten days out from the start of the month.

The frame work and community is ready to go. I have brothers with me that have been in the DFP for years.

They are always their to guide you,

they are also amused to see the occasional guns blazing big talker who quits in 2 days.

But as I said, the DFP, all in, everything I know.

Straight up. It is probably is too much. I agree.

So take a 28 day challenge. Call it what ever you like.

At the end of it, if you want to see how far you can take it (your life not just your body).

Maybe we can talk.

Until then, let's see if you can get through 28 days of saying no, going the extra mile, doing what you said you would do. And finding out the truth about who you are and if you do really want to change.

As I said, like my mother God rest her soul. Some people would rather die then change. And it cost her a lot more then 100 big ones and 28 days.

A decade, tens if not hundreds of thousands of dollars and in the end, her life.

I've seen first hand what "doing your best" and believing that shit looks like. If what you say isn't lining up with how you look, how you feel, life.

Find the link below. Start 1st of the month, or the next month if you need to think about it.

It's your life that changes. Not mine.

I am just showing you how to do it faster, simpler and not on your own.

Before you ask about my qualifications, forget about that. I have a PhD in pain and diploma in doing dumb shit.

I know exactly why you are where you are. And how to change it.

Once you hit buy now - you will be contact by email on how to begin.